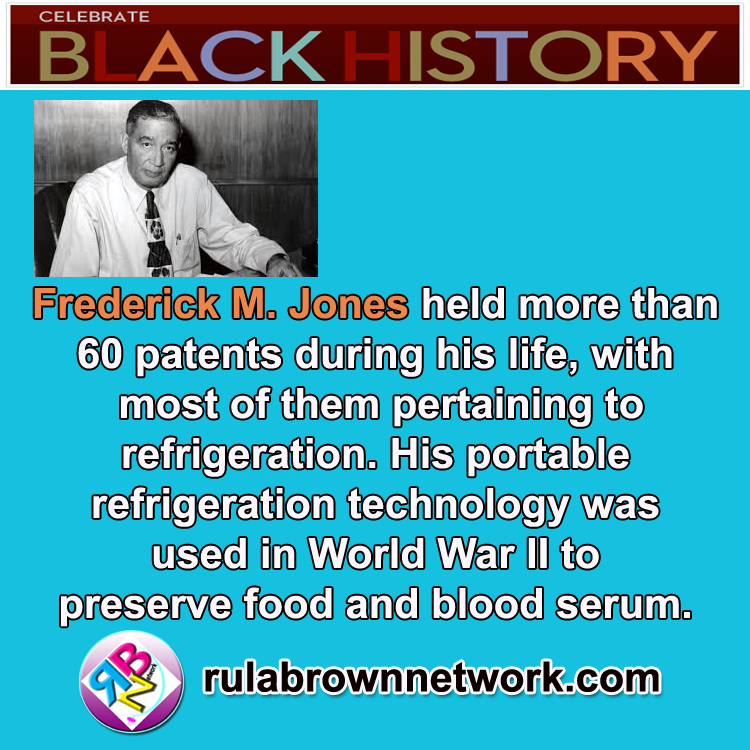 Nathaniel Alexander was the first to patent the folding chair.
Fact #2

In 1897, Andrew Jackson Beard invented the Jenny Coupler, a device linking train cars together through a bumping process. The Coupler was a boon to the welfare of many railroad workers, who originally had the dangerous job of hooking moving cars together by hand.
Fact #3

Henry Blair is believed to be the second African American to receive a patent. He invented a corn seed planter in 1834 and a cotton planter in 1836. Because he could not read or write, Blair signed his patent with an "X."
Fact #4

In the late 19th century, C.B. Brooks invented and patented the mechanical street sweeper, a truck equipped with brooms.
Fact #6

The "strongbox," a locked container used to store money and other valuable items, was invented by Henry Brown.
Fact #7

George Carruthers helmed the group of scientists that created the far ultraviolet camera/spectrograph, used in the 1972 Apollo 16 flight to the moon. His invention revealed new features in Earth's far-outer atmosphere and highlighted a variety of celestial objects from the perspective of the lunar surface. Carruthers was inducted into the National Inventor's Hall of Fame in 2003.
Fact #8

Mark Dean, along with Dennis Moeller, invented the Industry Standard Architecture systems bus, which allowed for the use of computer plug-ins such as disk drives, printers and scanners.
Fact #12

In 1884, Judy W. Reed became the first African-American woman to receive a patent for a hand-operated machine used to knead and roll dough.
Fact #13

Sarah E. Goode invented a bed that folded up into a cabinet, which could also be used as a roll-top desk. She received a patent for her work in 1885.
Fact #15

Charles Henry Turner, a zoologist and scholar, was the first person to discover that insects can hear and alter behavior based on previous experience.
Fact #17

Lonnie G. Johnson, an engineer who performed award-winning system engineering work for NASA space probes, invented the Super Soaker water gun, one of the world's most popular toys, in the 1980s.
Fact #18

Frederick M. Jones held more than 60 patents during his life, with most of them pertaining to refrigeration. His portable refrigeration technology was used in World War II to preserve food and blood serum.
Fact #19

History has credited Thomas Edison with the invention of the light bulb, but fewer people know about Lewis Howard Latimer's innovationstoward its development. Edison's light bulbs only burned for a short time until Latimer's carbon filaments were utilized, significantly lengthening bulb life.
Fact #21

Joseph Lee received a patent for his bread-crumbing machine in 1895 and patented a bread-making machine in 1902. His inventions revolutionized the industry.
Fact #22

Jan Ernst Matzeliger, of Surinamese and Dutch descent, invented the shoe-lasting machine, which connected the upper part of the shoe to the sole. His device, patented in 1883, greatly increased shoe productivity and made footwear more affordable.
Fact #25

Canadian engineer Elijah McCoy invented an automatic lubricator for oiling steam engines, for which he received his first patent in 1872. He would earn dozens of patents over his lifetime, and the term "the real McCoy" is believed to have referred to the reliability of his devices.
Fact #26

In 1914, inventor Garrett Morgan patented a breathing device in the form of a canvas hood - a precursor to the modern gas mask. He later became renowned for using his device to save workers who were trapped in a toxic fume-filled tunnel.
Fact #28

Garrett Augustus Morgan invented, among many other things, the first automatic three-way traffic signal system, which he eventually sold to General Electric.
Fact #29

George T. Sampson earned a patent in 1892 for inventing a clothes dryer that used heat from a stove.
Fact #31

Lewis Temple revolutionized the whaling industry with his invention of the toggle harpoon in 1848.
Fact #32

James West's research in sound technology led to the development of foil-electret transducers, with the innovation used in 90 percent of contemporary microphones. West holds more than 250 patents and was inducted into the National Inventor's Hall of Fame in 1999.
Fact #33

Granville Woods invented a number of devices related to railroad engineering, including air brake systems and what would become known as the "third rail" on modern tracks. He was also a pioneer in telegraph and telephone technologies, and would earn dozens of patents over his lifetime.
Back to top