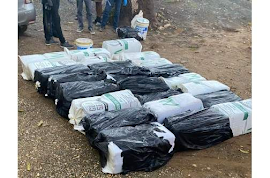 Acting commander for the St Elizabeth police, Deputy Superintendent Leroy Minott, told the Jamaica Observer by telephone that the soldiers engaged the police in a “gun fight” about 9:30 pm. Ganja and two firearms were allegedly seized in the operation.

The Constabulary Communications Unit (CCU), in a release, said the ganja seized weighed about 1,500 pounds. The St Elizabeth police, however, estimated the amount as 2,000 pounds.

“The police [were on] a narcotics operation [when] a JDF vehicle was intercepted. Two JDF soldiers [aboard the vehicle] engaged the officers in a gunfight. They were subsequently apprehended,” Minott said.

The CCU, in its release, said members of the Jamaica Defence Force assisted the police in the operation. “Reports are that about 9:30 pm a police team comprising of members of the Narcotics Division and the Westmoreland Division, assisted by members of the JDF, attempted to intercept a minivan in the area. However, the occupants of the vehicle reportedly fired upon the team and discarded packages as they attempted to flee. more